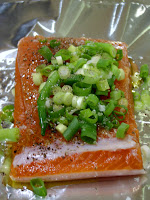 So now that we all know how to pronounce the word, there are a few things that need to be known about the locally run Loki Fish Co. For starters, their fish is freakin' awesome. So fresh and delicious, even for Seattle standards. At the market it comes either frozen, smoked, or canned. I've tried all three and any form it comes in is delicious. I've really enjoyed the canned salmon in the past; its pastel-pink flesh packed in oil is light and flaky with that indescribable "umami" flavor. This time, however, I went with a frozen piece from one of their coolers.

But what really makes Loki Fish stand out is their approach to fishing. The owner Pete Knutson, who runs the business with his sons, fishes along the coast of Southeast Alaska and the Puget Sound. Because it is such a small organization, the fish are apparently handled with the care never seen on those giant fishing vessels. After being caught, they are immediately processed, frozen, then flown to Seattle within 48 hours after arriving at harbor. So while technically their fish is sold "frozen" rather than "fresh", it is probably much "fresher" than most fish you might buy from a larger operation. They claim that they can have their fish on ice within 45 minutes of being caught, while a large-scale fishing boat might take 2 to 3 days to do that! Gross! But another benefit of running a smaller fishing business is that it can be done in a sustainable way. They are able to fish year after year in the same places because they are fishing respectfully rather than greedily--taking only what is needed instead of depleting the source entirely. For that reason, we can all breath easy knowing that we are eating salmon to help save the environment!

I didn't want to do too much with my hunk of salmon because I know how fragile and subtle it can be. I made a little "pouch" out of tin foil, topped it with some olive oil, salt, pepper, and chopped chives, then baked the whole thing at 325 degrees for about 20 minutes. The results were amazing. So moist and tender with not the least hint of fishiness. But the best news is that Loki fish is available not only at local Farmer's Markets, but also at restaurants and some grocery stores like PCC. So whether you want to save the world or just enjoy some good fish, find Loki fish if you can.
Posted by Ellen Holub at 7:49 PM

Ellen, thanks for your post on Loki Fish Company. I wanted to let you know that we launched a new website today and are linking to your enthusiastic article. We love our local press exposure, and especially that of our farmers market customers. Thank you for choosing Loki Fish! :)